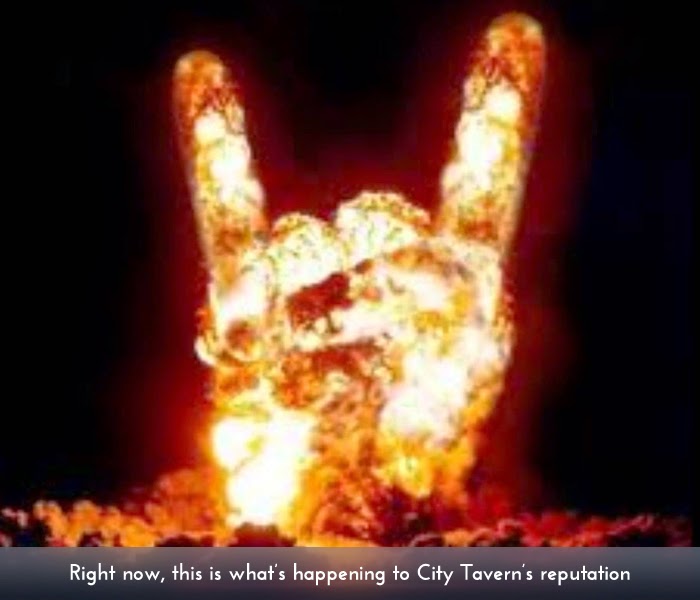 Y'know, I've never made a secret of my musical tastes. I am a metalhead. I may not have the long hair any longer (because damn, did I ever look like Meatloaf, when I had long hair), and it's no longer dyed every colour they could find in the barber's, but I remain, in my very soul, a headbanger till the day I die. Hell, that's even leaked into my books; I was intent that the Cynos Union would be 80s sci-fi, but with added metal, a bit like if Star Wars suddenly decided to switch out John Williams for Steve Harris out of Iron Maiden.

But anyhow, there is a point to this preamble; over the past couple of days, something has happened, a thing that's left me feeling more proud to be a metalhead than I ever have before (and I was already pretty bloody proud). It all started in a little pub in Newcastle...

Well, alright, according to the original story on Chronicle Live, it all started when the big honcho of said pub, City Tavern, kicked out a bunch of heavy metal fans because they were, in fact, dressed like heavy metal fans. This is a pub that explicitly doesn't have a dress code, mind, plus the headbangers who got the boot had been regulars for years, largely because the pub used to be known as a rockers' pub.

But, y'know, new ownership, 250 grand refit, and an owner who's reported as saying, "You’ve came in here with Slayer T-shirts and belts, it’s not a good look."

One does have to wonder how closely he had to look to see Slayer belts, but since they weren't wearing Slayer gear (and aren't even Slayer fans), it's probably a bit pointless to theorise. I'm not going to get drawn into talking about what kind of hang-ups the owner might have (because I can't know, and it's not fair to speculate), or what kind of clientèle he's wanting to attract (but come on, we all know it's stag do's and chavs). I'm not even going to call the owner what I want to, because it'd probably get me banned from the internet forever.

Nope, I'm going to focus on the good bit. The really good bit. The bit that made me immensely proud, except that the reason I'm proud might not be why you think...

Y'see, the pub's Facebook page is currently getting the arse trolled off it, to the point where this whole thing has gone viral, and well-known magazines like Metal Hammer, as well as people all round the globe, are talking about it. The lulz are epic, but that's not why I'm proud. No, I shall tell ye why I'm proud.

We metalheads, we're family. We look out for each other, and if an injustice is done against one, the very heart and soul of metal, fans like you and me, will rise up, roaring and snorting, and come to our fellow fan's aid. Sure, we might argue like cat and dog about who's better between Slayer and Iron Maiden (it's Iron Maiden, for the record), but that's just brothers and sisters doing what we do.

See, I know this from experience of being a drummer in more than my fair share of gigging bands. After a while, I could tell what the crowd was going to be like, just by looking at them, and the best audiences, the absolute nicest, most supportive people I've ever seen at a gig, were leather-clad bikers.

Bars like what City Tavern seems to want to be, now?

Yeah, those are the gigs I don't want to remember, especially the one where they started fighting as we were setting up.

And then, of course, there's the issue of tolerance, what with metalheads being the most accepting people I've met, too, which brings me on to a question m'good friend Bulldog (owner and canine overlord of NoiseMatters, a rather fandabbydozy place for finding unknown bands) suggested asking of City Tavern's owner. It's a good question, too, a nuclear-powered acid-edged scalpel of a question, made even better by being only four words.

"Where does it stop?"

Yeah, I don't even need to spell out the implications of that one, do I?

But enough of that. Talking about blatant bigotry against what someone clearly thought was an acceptable target isn't why I'm here. I'm writing this because I'm proud. Proud of you out there, my glorious, headbanging brothers and sister in arms, with yer leather and yer long hair, or yer short hair and yer cargo trousers, or yer Lita Ford blasting out while you fill in spreadsheets (because anyone who thinks there's one specific thing that can be classified as "a metal fan" is rather amusingly wrong; my 70 year old dad liking Nightwish is kinda proof of that).

Like the immortal prophets said, be excellent to each other. Oh, and of course, party on, dudes.

The ever-expanding and growing Cynos Union Series is available to buy now! Subscribe for more news from the world (and brain) of Mark W. Bonnett!
Posted by Unknown at 04:04