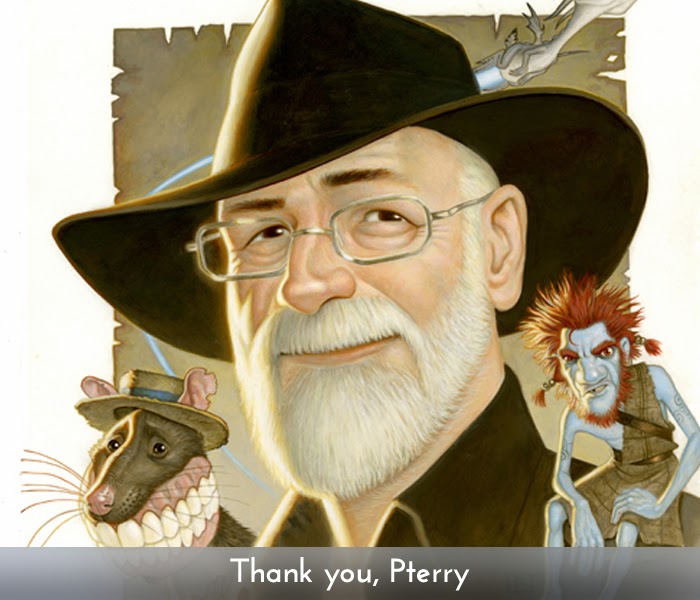 I said, when I write my little tribute to Harold Ramis, that there was one tribute I was dreading having to write, as I knew it would be the one that would hit me the hardest. That time has sadly come, and in the end, it's taken me over a week to collect my thoughts, and finally get this written.

And I've decided: I'm not going to write a tribute to Terry Pratchett. It doesn't seem enough, somehow, not for the man whose work has had the greatest effect on not just my own writing, but on my worldview.

I read my very first Discworld novel when I was a young'n, probably only about 12 or 13, when a cousin lent me The Colour Of Magic and The Light Fantastic. I was blown away instantly; never before had I seen the fantasy genre get the piss taken out of it so thoroughly, so affectionately, and so beautifully. From then, I was hooked, and as I read them, something happened to me, the same as I reckon happened a lot to people who read the Discworld novels.

I learned, and I changed.

I came to see the world differently, and not just because of the new and exciting ways I saw Pratchett twist and turn language into something wonderful. Pratchett may have been, to me, the greatest fantasy writer who's ever lived (and I say that entirely without irony or hyperbole), but what made his books really resonate round my brain, and rearrange my neurons in new and interesting ways, was just how insightful they were.

Show me any work about the human condition by Dickens, Austen, or any of the classics, and I'll hold up a Pratchett book and say, "I'm fine with this, thanks. It's got metaphor and dwarfs."

And so, I write this thank you. I'm not going to go on about how Terry Pratchett was a visionary and a genius (though he was those things). I'm just going to say thank you for making me the writer, and the man, I am today.

I hope Binky had his best saddle on when he came for you, Pterry. And like Granny Weatherwax said, if you haven't gone to a better place, you'll damn sure make it a better one.

(Image by Paul Kidby, source: paulkidby.net)
Posted by Unknown at 00:36