Ehren Kruger has no business calling himself a writer 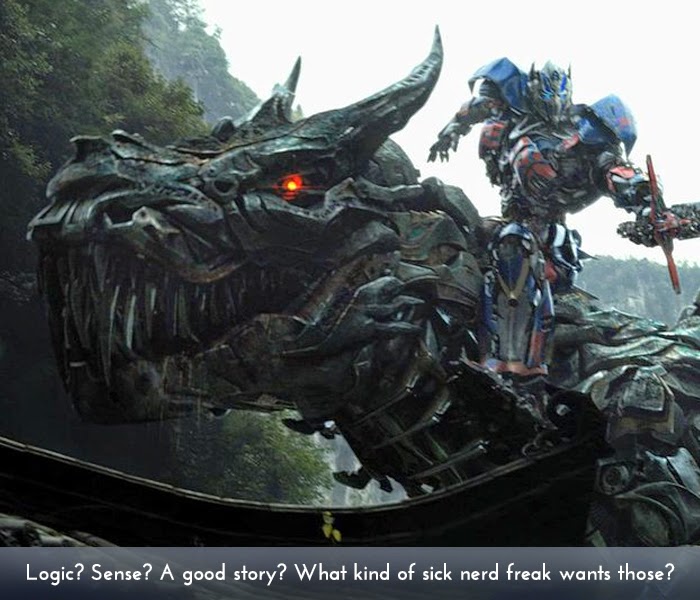 As I'm sure you can imagine, the art of storytelling is something that's, well, really really bloody important to me. I'd assumed it was important to everyone who makes a living through writing fiction, because when you're writing fiction, telling a convincing story is frankly everything. It's one of the main bleedin' points of the entire exercise.

So, imagine my surprise when I read that the writer for Transformers: Age of Extinction believes that it's just not that important...

Y'see, SlashFilm sat down with Ehren Kruger, the man who wrote all three of the Bayformers sequels, and what he said was rather illuminating. Specifically, what it illuminated was the opinion I spoke about in the title of this very post: Ehren Kruger has no business calling himself a writer. Oh, and I should also point out that this post isn't going to be about me shouting at the Bayformers movies for being utterly dire. I mean they are, obviously, but this little rant is going to be specifically about Ehren Kruger's interview.

I reckon you'll see exactly why it infuriates me so much, when I show you the money quote:


"When you’re talking about aliens, robotic machines which disguise themselves as vehicles and animals, you start to make your peace with the idea that logical sense doesn’t have to be the be-all, end-all."

I'm sorry, what? You mean to tell me that a story making sense is not one of the core bloody tenets of the whole bloody art of bloody storytelling? Well, what the hell have I been doing spending 90% of my time making sure that my books, y'know, make sense? Ye gods, I wish I'd known, I could have written any old drivel and still managed to sell it, and the books wouldn't take half as long to write!

Wow. Who knew that a narrative making sense wasn't the most important part of constructing a narrative in the first place?

Now, around this stage, I'd usually acknowledge that my opinion of Bayformers is entirely subjective, but that's sort of the point, really. I'm not actually ranting about the movies. I'm ranting about a man who calls himself a writer while, we can infer from his words, thinking the art of storytelling isn't actually that important.

And that disgusts me.

It cheapens the art of storytelling. It cheapens the hard work put in by writers who spend hours upon hours making sure their story makes sense. It's a huge insult to moviegoers and book readers, as it implies we're not smart enough to tell when a story is hideously badly written.

Besides which, as Mark Twain himself said, "It's no wonder that truth is stranger than fiction. Fiction has to make sense."

Ehren Kruger, you should be ashamed of yourself...

The ever-expanding and growing Cynos Union Series is available to buy now! Subscribe for more news from the world (and brain) of Mark W. Bonnett!
Posted by Unknown at 19:24

Email ThisBlogThis!Share to TwitterShare to FacebookShare to Pinterest
Labels: bad writing, bayformers, epic rants, thoughts on being a writer